In 1957, a group of Midwest Old Threshers Board Members wanted their steam show to have something that no other steam show in the area could have or acquire very easily. The idea of railroading was put forth and pursued. In December that year, the group purchased a 1925, 0-4-0 #2056 saddle tanker made by the Davenport Locomotive Works for $400. This little saddle tanker sat as a stationary display on the area next to a depot brought in from Hillsboro, Iowa. 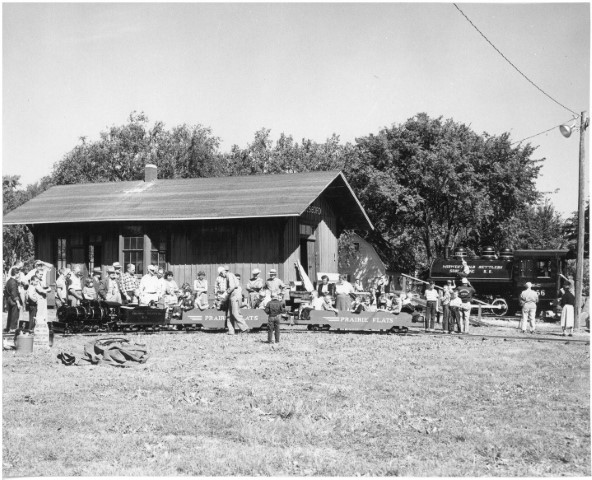 In November of 1959, the MCRR's founder, Stan Matthews, heard about an engine that was being auctioned off in Hardeeville, South Carolina in January of 1960. The sale was being held by the Argent Lumber Company which had gone out of business several years earlier. A small group of dedicated volunteers put together a fund raiser in the form of a letter that offered those persons contributing $10 a life time pass to ride the new planned railroad. 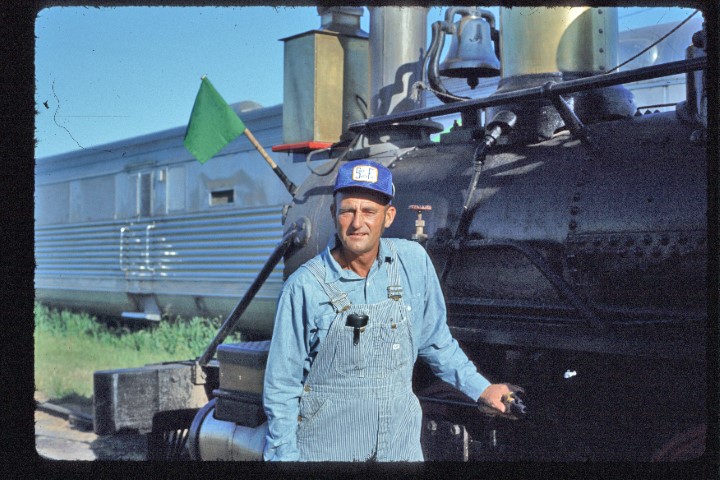 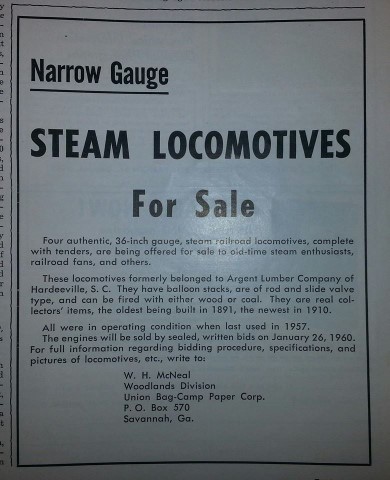 This small group of railroaders was able to raise over $7,000 from the mailings and went to South Carolina. There they purchased a 1891, 2-6-0 Baldwin Locomotive, the #6, made by the Baldwin Locomotive Works, Pennsylvania. The #6 had been originally ordered new for the Surry Sussex and South Hampton Railroad in Virginia. The engine hauled passengers and freight until it was sold to the Argent Lumber Co in Hardeeville, SC. in about 1935 to help haul lumber and work as a yard engine. 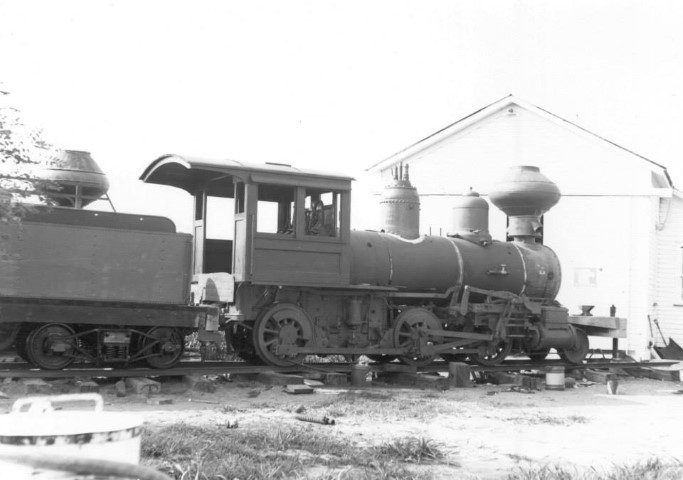 Also purchased at that same sale, was a 1906, 2-6-0 Baldwin Locomotive, the #2. This engine served the New Berlin and Winfield Railroad in Pennsylvania. The two locomotives, a car load of railroad related pieces, a Model T motor car, a four man pump car, and a section car were purchased from the money raised from the fund drive. 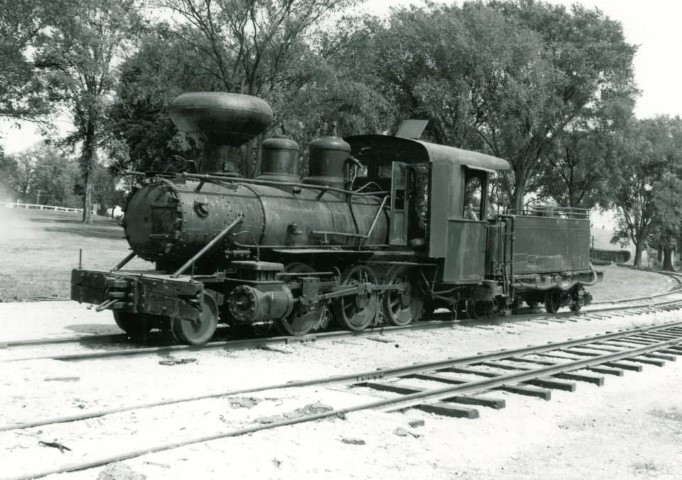 The building of the MCRR was a total volunteer effort by the group and many of the citizens of Mt. Pleasant.  A pole-barn type roundhouse was built; track laid a short distance; the #6 engine shipped and cosmetically restored to running condition in SEVEN months. The #6 ran at the 1960 Reunion. The #6, also known as "Maria" (named by her crew in her Virginia days) is the flag ship of the Midwest Central Railroad. 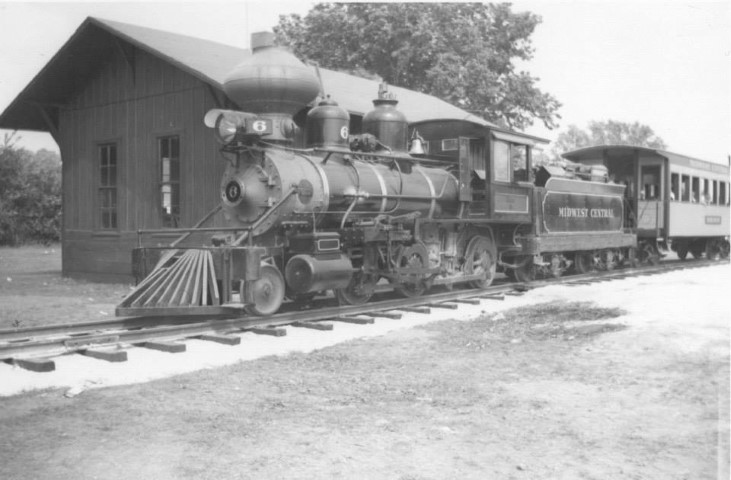 A full circle track around McMillan Park, approximately a mile and a quarter, was built in less than 2 years and the locomotive was turned completely turned around without the use of a turntable. By 1966, the railroad had added a caboose and several coaches built from scratch. A water tower from the Bevier and Southern Railroad in Missouri was moved and reassembled East of the roundhouse. A small trestle bridge was built from scratch by a group of CB&Q volunteers on their evenings off. 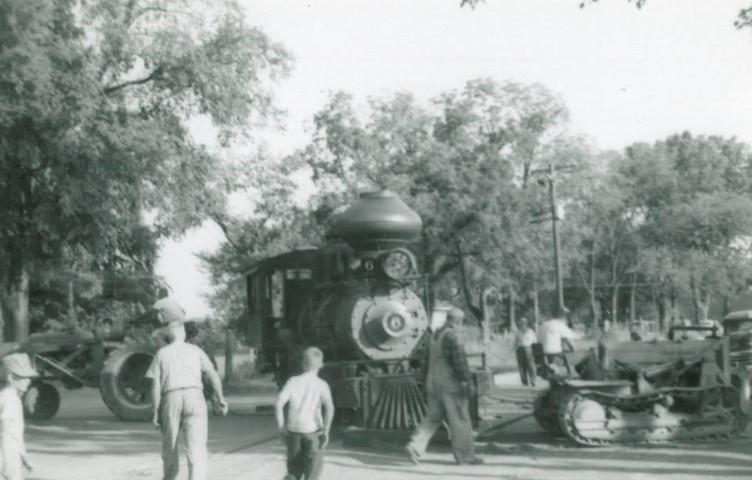 In 1966, Stan heard of a 1923, Shay #9, side-geared logging locomotive being offered for sale at Tuolumne, California. This locomotive was owned by the West Side Lumber Company and was sitting on a sidetrack with trees growing up around her. Stan went to California with his very good friend, Rube Leeper where they inspected and even test run the locomotive. They were able to purchase this locomotive built by Lima Locomotive Works of Lima, Ohio. They also purchased a Model A Ford fire crew car and miscellaneous rail equipment, parts and pieces and shipped it all by rail just before the 1966 Reunion. 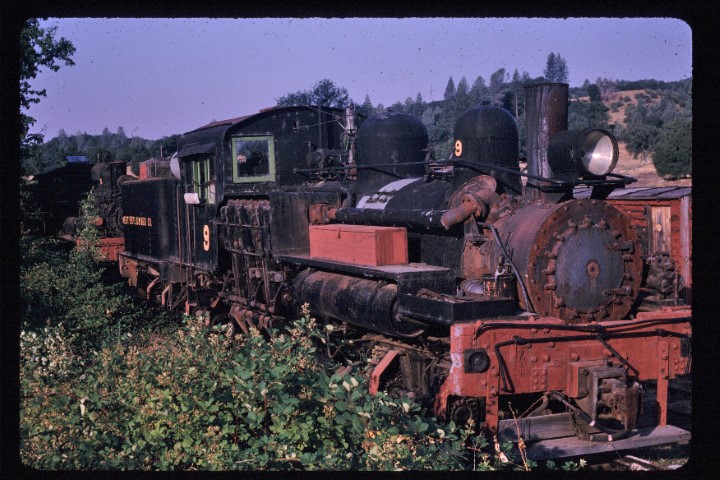 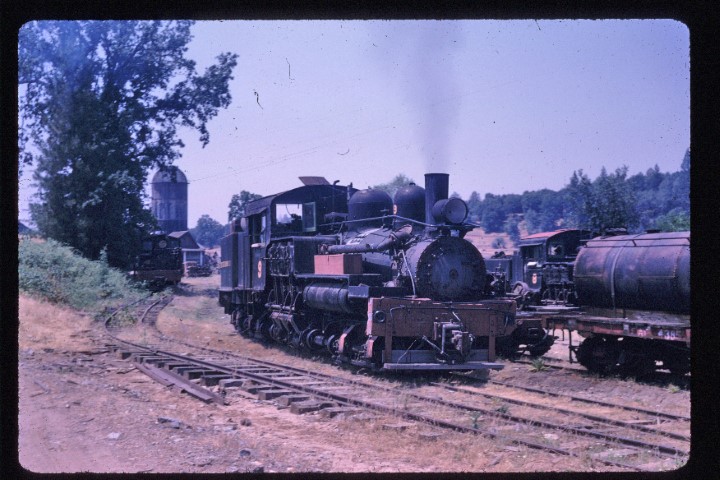 Test run of Engine 9 at West Side Lumber 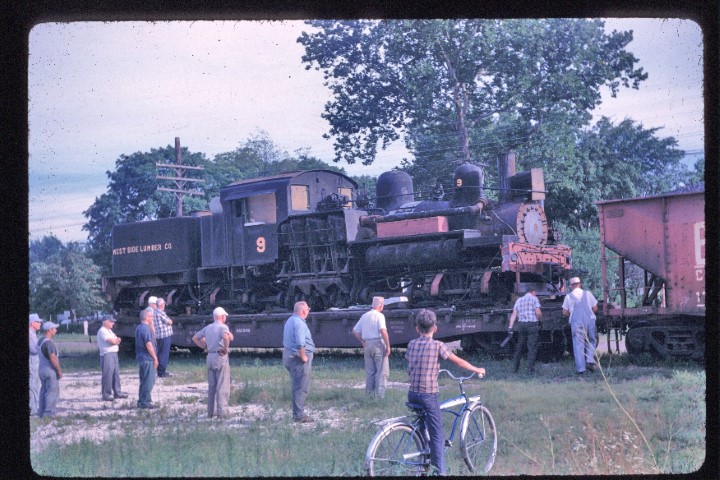 Engine 9 just after arrival in August 1966

In 1982, Jim Machacek purchased 2 Henschel 0-4-0 locomotives, built in Kassel, West Germany, that were sitting as scrap for 20 years in a Detroit rail yard. The engines along with several others, were to be part of a theme park train that never came to be. The #16 was built in 1951 and the #4 was built in 1938.  The #16 was cosmetically restored in just 11 weeks and put into operation on the Midwest Central Railroad.  The #4 was not restored until 1991 when she was purchased by Six Flags Fiesta Texas and converted into a diesel hydraulic locomotive by Shop Services.  She was in operation at the theme park until several years ago when she was taken out of service in need of a complete overhaul.  In 1996 Jim donated the #16 to the Midwest Central Railroad, transferring ownership of the locomotive at that time.  The #16 operated on the Midwest Central Railroad until 2012 when she was taken out of service in need of stay bolt repairs in her firebox. 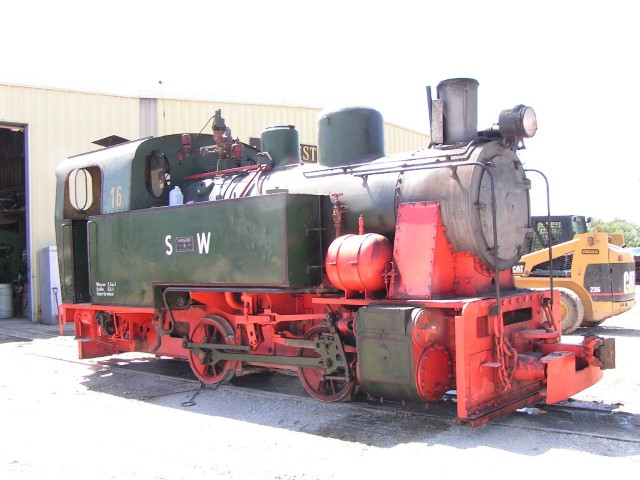 The MCRR has owned and sold various other locomotives in its history.  An 1897 outside frame 2-8-0 engine, #1,originally brought up from Mexico and #12, a 2-6-2 Prairie engine built by Baldwin and originating in Hawaii.  Also unique to the MCRR collection was the Burlington Zephyr cars of Mark Twain, Becky Thatcher, and Huck Finn. The Zephyr was later sold as it did not fit into the collection of steam engines owned by the MCRR.

The MCRR has had many celebrity visitors, including Charles Kuralt and Art Linklettert. There  have been commercials with the late John Denver. The hand cart was shipped to Africa for an ABC commercial as well as other colorful bits and pieces in other TV and movies roles. Most recently the handcart and a coach were leased by the "Dr Quinn Medicine Women"© TV show and movie. The locomotive on that show, was also built at the MCRR shops by Shop Services Inc. and ran on MCRR tracks for more than two years. 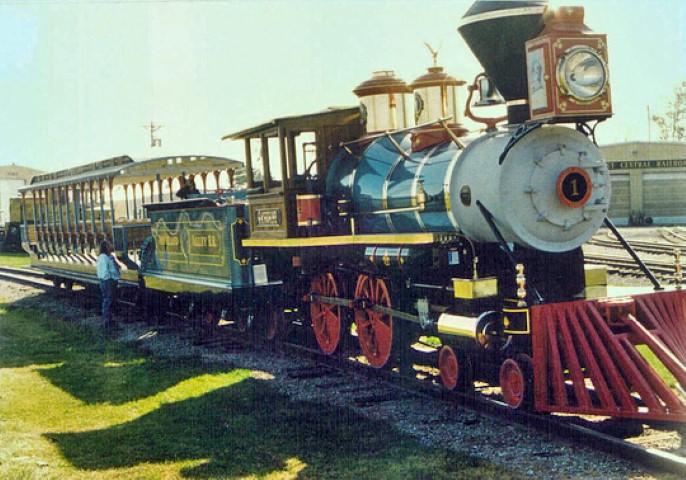 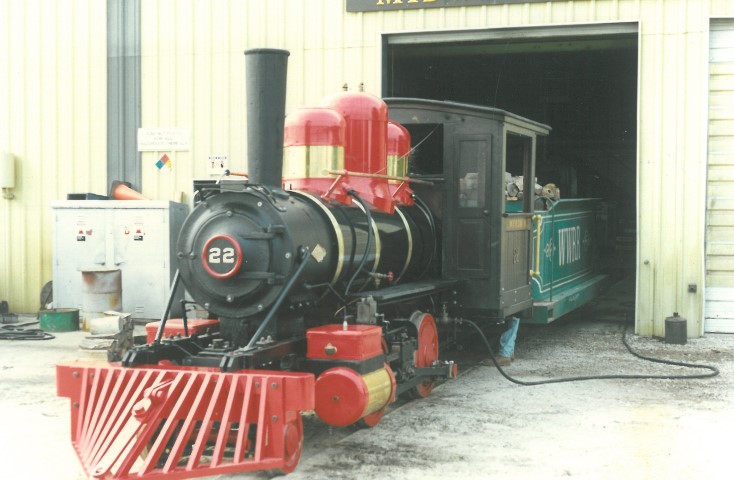 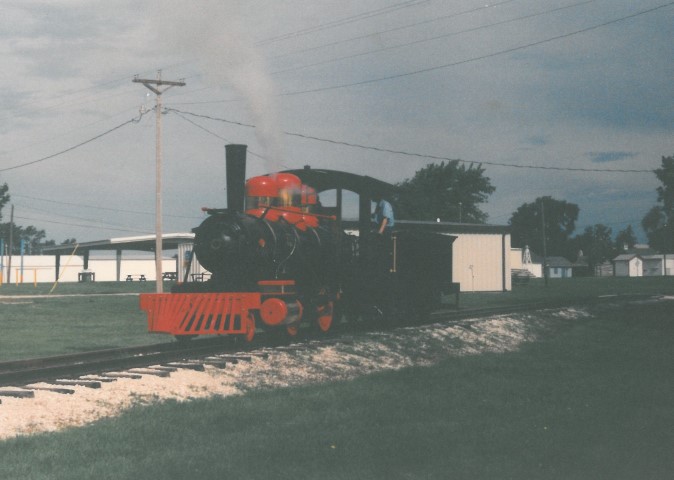 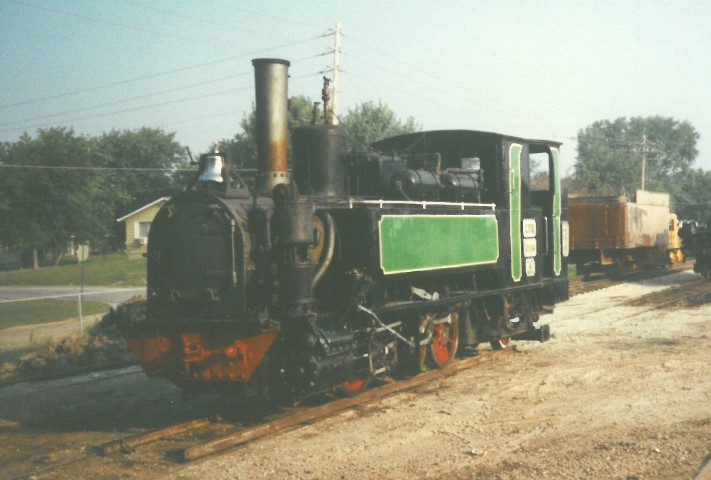 The Midwest Central Railroad spawned a business that rebuilt old locomotives, did various other railroad equipment restorations and built and sold air pumps. This business was called Shop Services, Inc. Locomotives restored include a Michael Jackson theme park engine, "Cedar Point"© theme park locomotives, "Disney"© and the cosmetic restorations of such engines as the CB &Q 710 to name just a very few. This was such a unique business because no where else, except on each individual railroad, would this kind of locomotive repair and restoration service be found. Many of these locomotives were actually shipped by rail and then by truck through the streets of Mt Pleasant. A truck with 64 tandems brought in the CB&Q 710. It was, needless to say, a traffic stopper in town. And again this engine only received a cosmetic restoration and did not actually run when it left town. Unfortunately, with the death of Stan Mathews in 1994, Shop Services closed soon afterwards. The Midwest Central Railroad, being a volunteer organization, still survives. 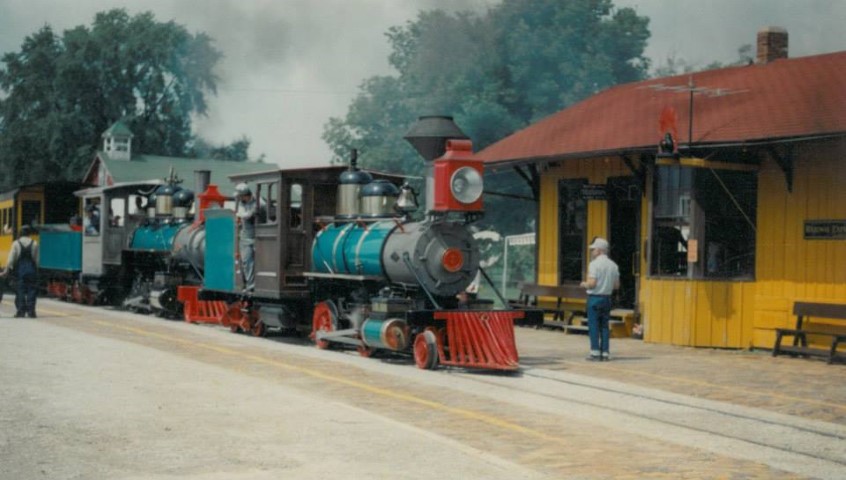 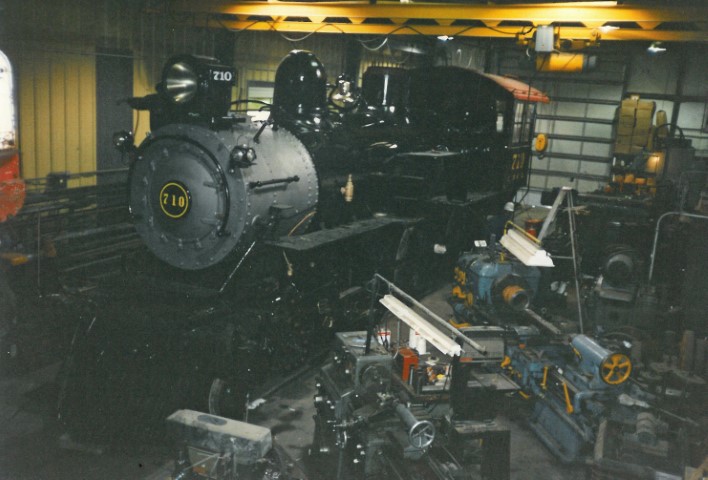 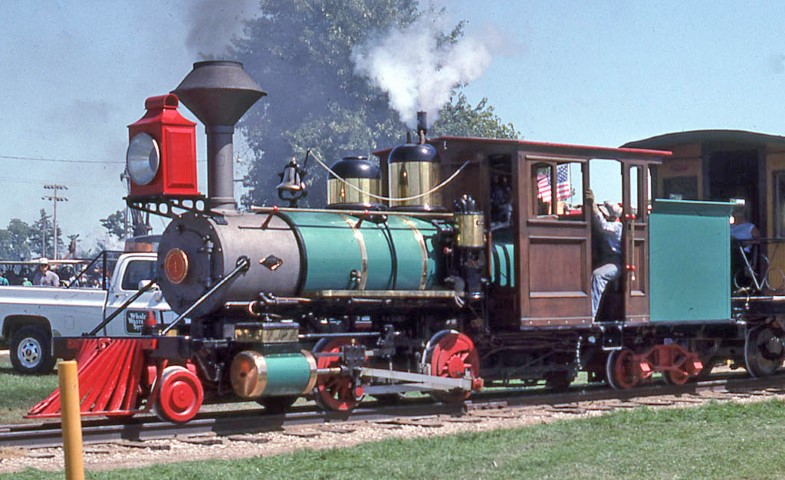 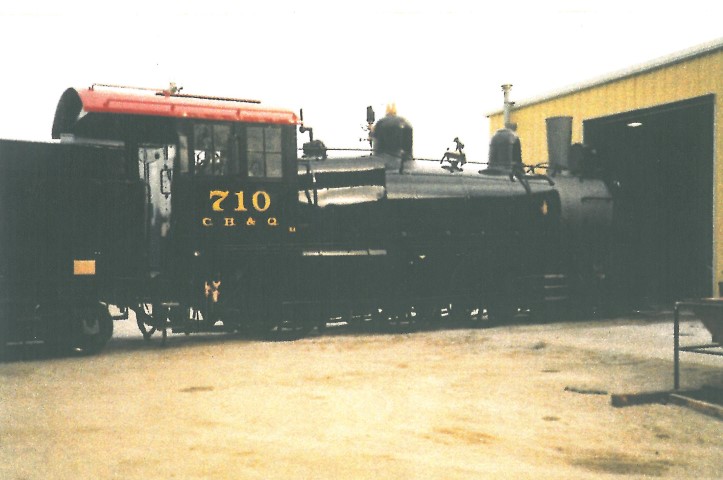 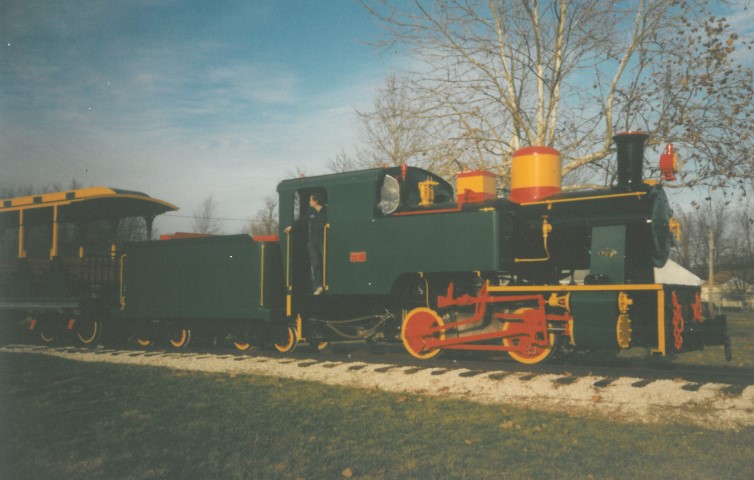 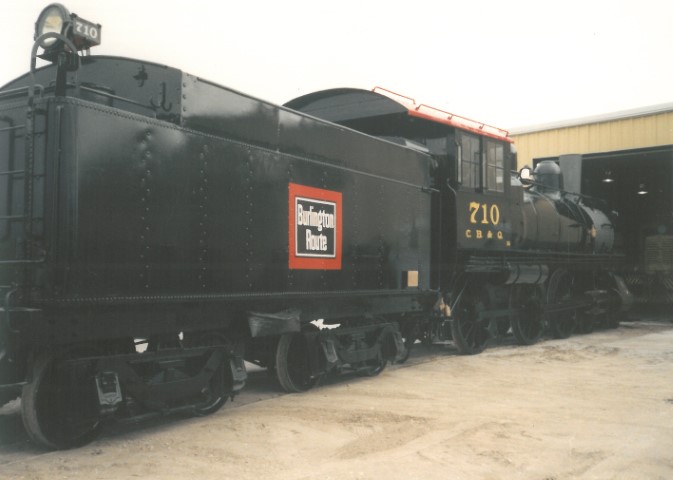 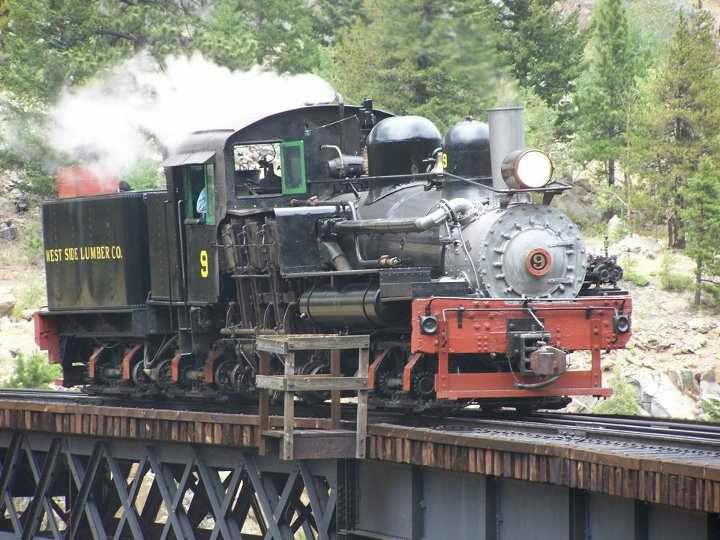 In 2010, the MCRR started negotiations with the Georgetown Loop Railroad in Silver Plume, CO, to "exchange" the two railroads' engines. The exchange consists of two long term leases: a) the GLRR has leased the MCRR's Shay, Engine 9, for a period of 7 to 10 years and b) the MCRR has leased the GLRR's Baldwin 2-6-2, Engine 12 for a similar time period. 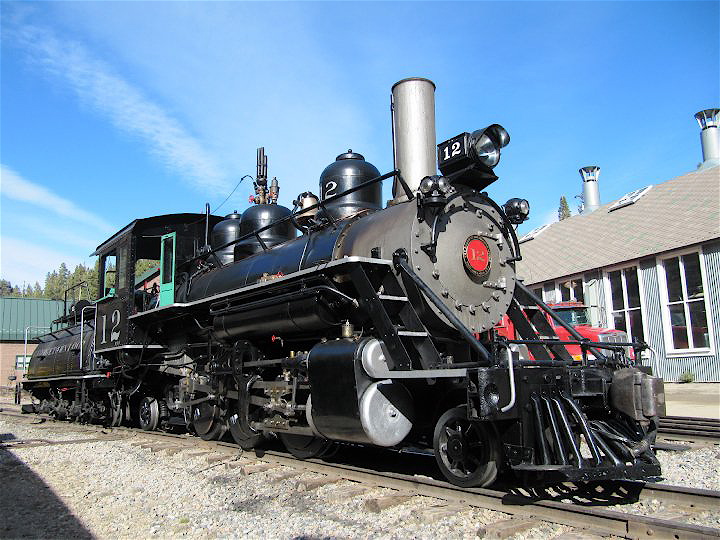